I spent most of today in my kitchen. We had nine at table, wanting to eat at 6:30 because Denise likes to eat early and I’ve never catered for so many.

I guess I didn’t make it easy on myself. Main course was no problem (tagine and cous cous) but I went a bit designer with dessert.

I’d decided to make elderflower mousse given mum’s sudden newly discovered love of elderflower, but wanted to pretty the plate up a bit. I made some shortbread sticks to lay across the glass. I then made some date ma’aoul and nut cakes to sit next to the glass.

Without sounding too cocky, I thought it looked quite presentable (sadly I didn’t take a photo). Mirinda, my greatest food presentation critic noticed immediately and praised it appropriately.

So, a lot of baking over the course of the day, interrupted occasionally by housework tasks.

Denise and Trace turned up first and Trace immediately made friends with the dogs and fussed over them to the great delight of Freya.

They’d both spent a lovely (if somewhat cold) day at Hampton Court Palace. Tracey even made it out of the maze. They’d also been on quite a few trains and experienced the lunatic fringe sometimes found in railway ticket offices. Then, to cap it off nicely they managed to find the only Farnham taxi driver who doesn’t know our street.

Then Jackie and Terry arrived which meant a big group of people were stood in the hallway talking for an age. Mum and Jackie have been friends forever and it was a lovely reunion. We haven’t seen Jackie since…well, from before we knew where Frant was.

And then, finally, Dawn and Chris completed the cast of diners and the scene was set for murder and mayhem. Perhaps not murder but there was quite a bit of mayhem.

Naturally we were all very noisy, laughed a lot and were generally like we normally are when more than two of our family get together in one place.

It was a jolly fun night, culminating in Chris being handed Tracey’s phone to take multiple photos of the rest of us. Which is why I’m in this photo. A rare occurrence indeed. Though I rather wish I’d taken a photo with Chris in it for the blog. Still…this is one of Tracey’s: 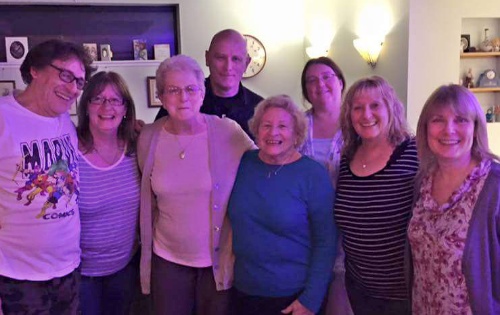 As the party broke up, Mirinda and I drove the girls to the station where we all carried out the Farewell Dance Ritual as their 444 pulled out of the station.

A very pleasant evening indeed followed by the inevitable clean-up before bedtime. I do so love my dishwasher…