A while ago the Hop Blossom underwent a bit of a facelift. I’ve been meaning to post a photo of the new look but keep forgetting. To redress this awful omission… It even has a new sign and doesn’t mention that it’s a Fuller’s, which it was before. Maybe it’s a Freehouse now.

Here is what it looked like a few months ago. 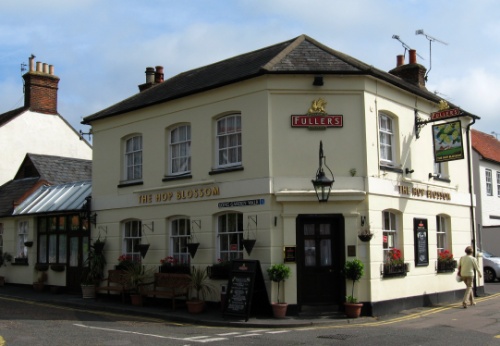 The fixture for the light fitting out the front has even been changed.

That wasn’t the highlight for today. Nor was my gym session though it was thoroughly enjoyable. I’m actually starting to master the Seated Leg Curl contraption though it does make me feel a bit of a Borg when using it. It’s rather nice to be able to bend my right leg though.

Shopping certainly wasn’t a highlight. In fact I’d go so far as to say it was the opposite. They didn’t have any lightly smoked salmon, which is just plain wrong.

No, the highlight was Emma tripping me over in the Garden of One Thousand Yaps.

One of Emma’s more annoying habits is the way she deposits balls at your feet when you’re working in the garden. This can get very annoying when one is picking leaves one by one. Anyway, I was basically ignoring her and just leaving the ball where she left it, careful to note where it was in order to avoid standing on it. This meant I didn’t see her when I stood and turned towards the wheelbarrow, hands full of leaves. When I did see her it was a bit too late as I tried to avoid her.

Fortunately I did avoid her just before I squashed her beneath my feet…and the rest of my body. Of course, I went flying though managed to land on my side rather than my knee. The most annoying thing was having to pick the leaves up again, which had flown everywhere during my rapid descent.

I can report that, though I was left a bit sad and sorry, there appears to be no permanent injury and I was fine after a cup of coffee and a minor bit of leg rest.

While in the garden…here’s the latest mahonia update: 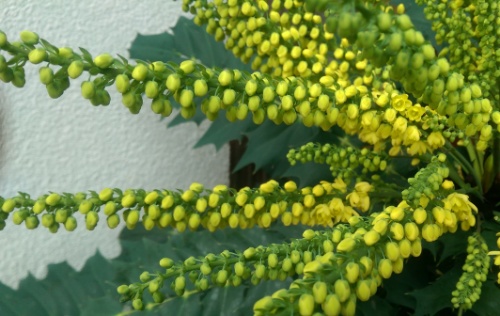 The flowers are starting to appear! The scent will surely follow.