I can’t remember having so many flowers at this time of the year before. Particularly roses. And not just these yellow roses… 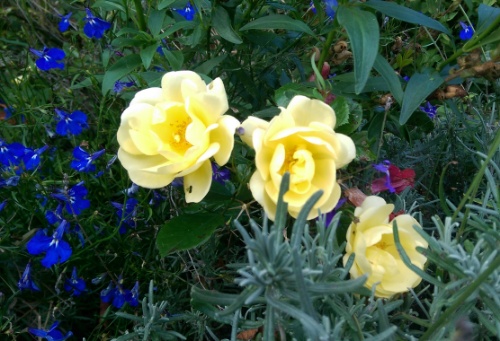 …there’s also a few red ones. Speaking of ‘red’ the clematis is also in bloom…again. I can only imagine it’s because I’m not doing any gardening.

The leaves have also started falling onto the terrace reminding me that I’ll have to sweep them up this year because my leaf sweeper is in Queensland.

Not a lot happened at home today. Mirinda Skyped and I cooked (a lovely tagine that took four hours). We did pop down to Pets at Home to get the girls enough food to tide them over while they stay with Sue, and Homebase for some John Innes #3 and, naturally, Mirinda took the girls for a lovely long walk at Thursley.

We also started watching Glitch, an Australian series that recently started on Netflix. We’ve just finished the latest series of Rake which almost made us homesick seeing as it’s filmed in Sydney.

In fact there were quite a few shots featuring St James’ church where I worked for a bit back when I erected air conditioning. They wanted to convert their crypts to office space and they hired Wildridge’s for the air. I think I worked there for a week.

Glitch, on the other hand, is filmed in Victoria and is in the country. Even so, it’s very, very Australian and reminds us of the many hours spent touring through old towns…though without the dead people. Anyway, the first episode was excellent and we’re hoping for more too come.

To finish off…here’s some more flowers