We saw a lot of dogs up the park today. Along with Charlie the Labradoodle we also met four chihuahuas. This made Freya very happy because it’s one of the few breeds she can lord it over. 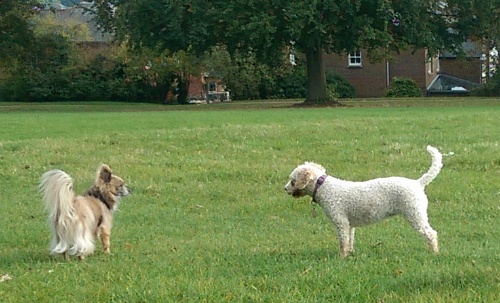 The little chap above stopped with us for a bit of a romp and then trotted confidently off. His owner then appeared all huffy and puffy with a walking stick and a second chihuahua. She asked if I’d seen the first one. I told her he’d just gone off and pointed in the direction. She swore under her breath and set off in pursuit.

Sitting on the bench I came across this rather cryptic note on a newspaper page.

Given the mysterious shoes, I’m wondering whether they are both spy communications. I’ll now be looking for a third thing in order to triangulate the possibilities.

My knee was feeling a lot better today so, rather than just sit on the bench flicking the tennis ball and occasionally calling out Freya’s name, I decided to try walking up to the Avenue of Trees. This was good and pretty much pain free. It was coming back, walking downhill, that it started to hurt. Still, I was fine after a bit of a leg rest on the lounge.

It was worth seeing the trees if nothing else.

I also managed to go into town first thing to go shopping. It feels pretty good to get back into my routine. Now if I could just walk into town instead of waiting for the bus, things would be perfect.

A worn out cockerpoo

1 Response to Smaller than Freya