The brown one looks knitted

I spent a lot of today in the garden, something I’m actually starting to enjoy. (I’m not sure of the wisdom of that statement.) I planted up the dwarf sunflowers and the gerberas we bought at the Summer Garden Show on the weekend.

I’d sat most of them in the gap in The Former Residence of Xun Ma but that had proved to be too much of a temptation for the slugs. When I checked on them the next day, the gerberas had been the victims of a sustained attack of super slime and monster munchies. Mirinda moved them to Freya’s staddle stone, in the corner of the Hot Border and the devastation stopped.

The trouble with the corner of the Hot Border by Freya’s staddle stone is that it hasn’t been weeded for quite a long time. The grass has overgrown it and fennel has started to appear, dandelions are rampant and strawberry plants keep appearing. The reason for this is not because I can’t be bothered (like other areas of the garden) it’s because of the ants.

Located at the edge of the path and directly in front of the staddle stone is an ants nest that has an instant eruption of ants every time I so much as think about pulling a weed up. Today, however, there was nothing for it but to put up with the millions of tiny black insects crawling on my feet. Fortunately they don’t bite and I can just flick them back to the ground from whence they came.

Naturally we won’t use poison and, besides, the ants aren’t exactly hurting anything unlike the slugs and snails which I HATE.

Eventually, I had the ground cleared enough to plant the gerberas and they bring a little corner of colour to the Hot Border which it was clearly lacking.

The Former Residence of Xun Ma, as well, was improved with the tiny sunflowers..

…and there’s nothing like adding a bit more hot colour to the already Hot Border.

I then set to and cut the grass; never particularly onerous once it’s routinely reduced. Speaking of grass, the tractors have been out and about in the park again. You can tell because, firstly there’s little rows of cut grass everywhere but also because that’s where Emma rests her hot tummy in between ball chasing marathons. She was a bit lost today given the grass was no longer there.

Which brings me nicely to the title of this post.

It was while we were returning to the house. We walked by a bench upon which two older ladies were seated. They were laughing at Emma’s antics as she ran for the ball and returned it to me for another go. As I drew close to them, one lady said “The brown one looks knitted!” I laughed because it’s true and then replied, “And the white one’s a flannel!”

The ladies laughed but then denied it saying how cute Freya was. I guess they had to really because Freya was jumping up at them and generally being a friendly nuisance. Fortunately she didn’t try and sit on their heads. 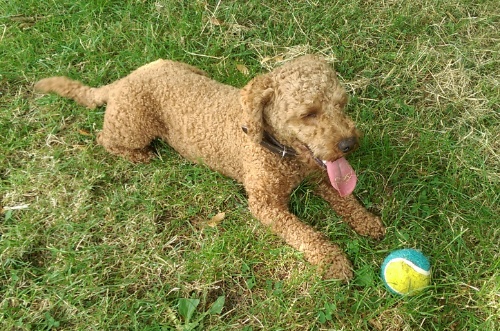 1 Response to The brown one looks knitted