Spare a thought (or two) for poor John Fitch. There are a few Americans who realise that he invented the first American steamboat (they built a shed for him and called it a museum) but most of them believe it was Robert Fulton. To be honest, most Americans think Robert Fulton was the first person in the WORLD to invent a steamboat which is just completely wrong. But then again, most Americans think they invented everything. Including gravity. And God.

Anyway, John Fitch was an extraordinary man. He was born in 1743 in Connecticut, and, after only two years of schooling, was dragged away from the blackboard to start working on his father’s farm. Not happy with this, he went and worked with a clock-maker who quickly realised he shouldn’t be teaching anyone his skills or he’d lose all his business to a competitor he trained and so, sacked the poor boy.

After a bit of self discovery wandering (which he was rather keen on), John found himself in the right place for the American Brexit so he enlisted to fight the Brits. Sadly he wasn’t very good at it and spent most of his time fitting bayonets to guns. This grew dull and eventually he started cleaning clocks. Having cleaned all the clocks, he then started selling black market items to anyone who wanted them. Given it was a time of war meant most people needed the sort of things he was selling…as opposed to having their clocks cleaned. He was successful…for a while. He lost all of his money when the money he had made became worthless because it was colonial.

The ‘for a while’ thing dogged him his whole life. He went into land speculation and was successful (for a while) but he was gazumped by ‘ornery prospectors. He tried a second time but Congress intervened just at the wrong time to declare his enterprise illegal and took away all the land he’d managed to accumulate.

And it wasn’t because he wasn’t good at the things he did. He was always quite successful for a time…just not permanently.

One thing he was very good at was walking. Had there been money in walking he’d have died a very wealthy and successful man…well until he got rheumatism. I’m not sure why he walked everywhere but he did. For instance he heard there was something interesting in Kentucky so he walked there…from Warminster, New Jersey. That’s about 700 miles. Seriously, nothing could stop him walking so it’s ironic really that he invented a contrivance for propelling people along without any effort.

As I mentioned above poor John was eventually struck down with awful rheumatism which almost put an end to his walking everywhere. I say almost because he did walk a very painful four miles once.

It is said that the idea for the steamboat came to him as he was going down a country road. A sedan chair passed by and he wondered if he could create a machine which would propel people along (clearly with all the walking he did he had plenty of time for inventive daydreaming). He quickly cast this thought aside realising at once that the road would be too bouncy and not conducive to any form of engine. (If only he’d invented rubber tyres and suspension first!)

Perhaps he then saw a puddle…Water, he thought! Of course, an engine to drive boats across water. So he invented a steam engine. When he discovered this had already been done by Trevithick in Cornwall, he scrapped the engine and went straight to the application of it to boating. And in this he was successful…for a time.

He designed a steamboat. He sent his designs and thoughts to the American Philosophical Society in 1785. He approached all manner of people for support. Everyone ignored him. He built a steamboat anyway and went as far as to take a bunch of congressmen on a test run on the Delaware River but, still, he received no support. Why? It’s totally beyond me.

Unperturbed, he went to France. It seemed there was a chap called Aaron Vail, a rich American investor, who’d said he’d put up the cash for the venture. Arriving in France, poor John was forced to turn around and return to the States because he’d disembarked at the beginning of the French Revolution – not the best time for people to be there and, besides, the last revolution he’d been in hadn’t been all that good for him, business-wise.

So, back to America and New York, where he tested his steamboat on the strange and rancid waters of Collect Pond.

The pond isn’t there anymore. It was right next to the African Burial Ground. It was filled in a long time ago but when John was ready to float his boat it was not the nicest part of the great city to come. In fact it would be fair to say that it was rank. If there’d been shopping trolleys and plastic bags, Collect Pond would have been full of them. In fact I’m wondering if it was called Collect Pond because all the detritus of life collected there.

Why John decided to test his steamboat on Collect Pond in 1796 is anyone’s guess. He’d already used the much nicer Delaware River but, for some reason, he did and it worked well. It went back and forth a few times with John at the helm, a young lad at the tiller and two gentleman chatting in the bow. The young lad was a fellow by the name of John Hutchings. I don’t know why he was there but, according to him, he was. He also claimed that the two chaps in the bow were none other than Robert Fulton and Robert R. Livingston, Fulton’s wealthy benefactor.

This all came out in 1846 when Hutchings presented to Congress a very nicely printed lithograph showing the boat and the people in it, a map of New York with Collect Pond included on it and depositions from various unknown people claiming to have witnessed the experiment. He was angry about Fulton being hailed as the father of the (American) steamboat when, as far as he was concerned, it just wasn’t true. Obviously it was Fitch.

Fulton, of course, was a brilliant man. He found a very wealthy man to back him and he imported an engine from England. He also sailed his first steamboat up the Seine to the adulation of the world. Still, he didn’t do this until 1804. And, of course, Fitch wasn’t the only one that came before him. I’ve already written about the Marquis de Jouffroy d’Abbans and his Pyroscape of 1783. Though, to be fair, Fulton did acknowledge the Frenchman. It was the Marquis who was the first and he’ll always remain so, regardless of what Americans try to say.

In 1797, John Fitch decided to return to Kentucky to sell some remaining land he held there. He’d sell the land then build a new steamboat to chug up and down the Mississippi. Of course, given John’s run of luck, the land was occupied by squatters who refused to move. Then John was involved in costly court cases.

Finally, worn down by the vagaries of life, John took to the bottle then, in 1798, he took his own life with an overdose of opium pills. A sad end to a resilient man who had just had enough. 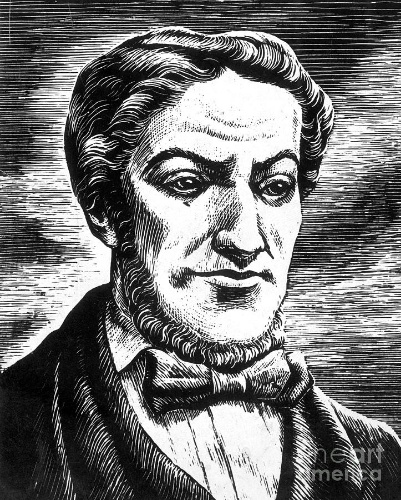 This entry was posted in Biographical sketch, Gary's Posts. Bookmark the permalink.