Today was the last home game of the season for the Never Quite Mighty Shots. Tom wanted to go again. Who am I to argue? I mean, really. I only do it so Sophie can have a few free hours with Mirinda.

As usual they came over for lunch first. I decided to cook something traditionally British for a change. Mirinda wasn’t sure if Sophie would like it. I said that was nonsense.

I made toad in the hole with baby new potatoes, peas, beans and a lovely thick gravy. I was quite happy with it. 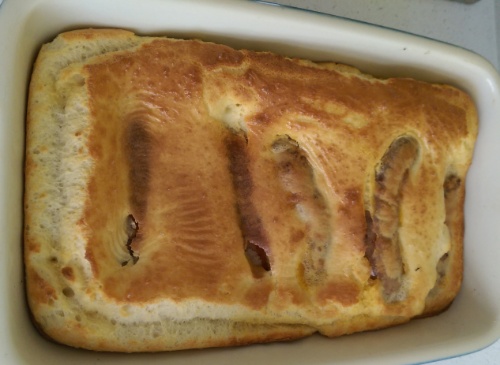 And Sophie enjoyed it…as I knew she would. Tom, of course, left half of it on his plate and had a cheese burger at the match. Not that that was unexpected. I served hummingbird cake for dessert given there was still some left.

Eventually we headed off for the bus, leaving the women folk to drive to Winchester.

Originally Nicktor was coming to the football today but I had a miserable text from him this morning saying he wouldn’t be able to make it because he was too busy. Lucky boy. The game was awful.

In fact, the highlight was when the Phoenix wandered around the pitch waving to everyone. 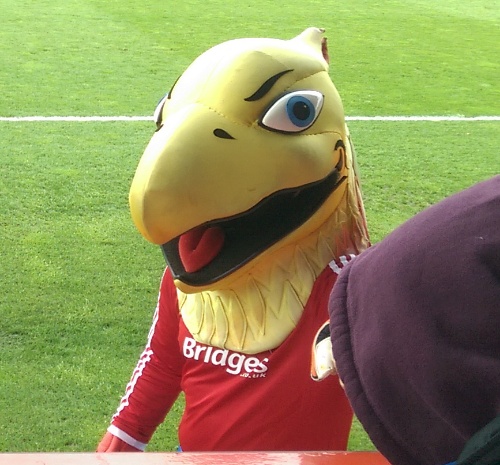 Tom reckoned it was an odd choice for an occupation. I agreed but said being a phoenix was at least better than the guy who dresses up as a big, stupid bumble bee every home game. He laughed, finding it difficult to imagine a man dressed up as a bumble bee, stupid or otherwise.

The game held some promise for the first ten minutes (we scored after nine of them) but after that it was as if they were just going through the paces. I was surprised that Southport didn’t score more than two goals given their dominance on the pitch.

As it was, full time couldn’t arrive quick enough and it ended 1-2 with some relief and a fair bit of booing from disappointed fans.

These same fans had unfurled a long banner at the beginning of the game complaining that the home results this season were really not good enough. The banner was screwed up and removed by stewards in double quick time but not so quick that a few people didn’t see it.

Speaking of fans, being in the family stand, as we were, we ended up surrounded by boys slightly older than Tom who managed to be quite funny without trying (and not so funny when they did try). They were more entertaining than the game. At one point they all chose the Southport number 8 to boo every time he touched the ball. This was in order to put him off and raised great squeals of delight whenever he did anything wrong. Then, however, he proved that some people just feed of criticism (misplaced or not). He raced up the other end of the pitch and scored Southport’s first goal. The kids stopped booing him after that.

As we left the ground we ran into Neighbour Dave who very generously drive us home.

A lovely day… just a pity about the quality of football.

This entry was posted in Football games, Gary's Posts. Bookmark the permalink.