Today was the Queen’s 90th birthday. Her real birthday rather than the one we get a holiday for. One house in our street had a big flag hanging out of an upstairs window. Obviously a fan.

As well as Elizabeth II’s birthday, it was also the day of the Anderson Medal ceremony. This is a yearly award presented to the author of a book on a maritime subject deemed to be the ‘best’. It’s awarded by the Society for Nautical Research, a society of which I am a member.

So, I was off to the National Maritime Museum after lunch to attend the ceremony.

The trip to Greenwich was pretty uneventful marked only by the guy on the train who looked like someone had swapped his face for that of a pug. Very scary Dr Moreau stuff.

In an attempt to frame his canine features, he’d instructed his hairdresser to shape his fringe in a wide arch across his forehead. It was quite unsettling but difficult to look away.

It seems the fastest way to Greenwich from Waterloo is by changing from the Tube to the DLR at Herons Quay. I figured there’d be a bus… which there sort of is but it takes an hour and a half, something I wasn’t keen on. So I caught the Tube.

The museum looked lovely, as it always does… … and I happily joined the other members for coffee and biscuits before going into the lecture hall.

There was an amazing number of women at the ceremony. I overheard one talking about Captain Cook in Tahiti and a book she’s writing. The woman with her is working on a book about Nelson (like we need another one).

Here’s the thing. Almost everyone knew each other. I wasn’t the only loner but there were precious few of us.

The recipient of the Anderson Medal was a chap by the name of Rip Bulkeley and his book is about Bellinghaussen and the Russian Antarctic expedition 1819-21.

His talk was about the problems associated with finding information on the expedition. It didn’t help that a flood washed away a lot of the primary sources quite early on. There was also the little matter of the Communist period, which wasn’t too keen on information.

His talk was great and I think I’d better buy the book now I’ve heard about his difficulties in researching it.

We also heard a lot about what’s in store for the museum. All very exciting, I must say.

Then, to round the day off, as I walked from Herons Quay to Canary Wharf, the news that Prince had been found dead in his home was rotated around the Reuters building. So sad.

Almost forgot…here’s a photo of the completed Higgledy Piggledy Palisade. 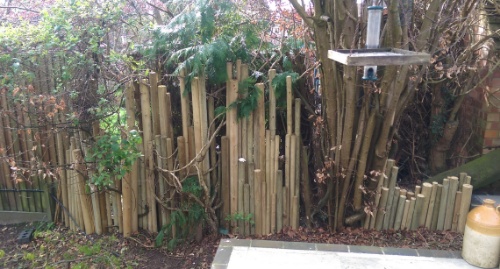