Laughing on the outside

I have two construction updates today.

On my way home from a Talking Newspaper session, I spotted the amazing construction of scaffold that is threatening to completely engulf the old Colony restaurant. 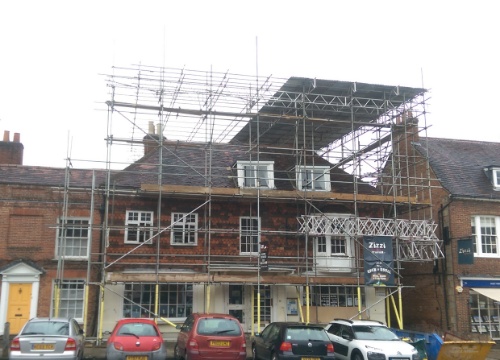 I stopped for a chat with Emma’s favourite postman (he just happened to walk by) who claimed that when conservators step in to repair wobbly roofs, the contractors tend to cover the entire structure in a temporary shelter. Combined with the length of time the refurb is taking, this sort of structure must add a lot to the cost as well. The new tenants are going to have to sell a lot of tapas to cover it.

I feel a bit sorry for poor Zizzi’s which is just down the lane and has been forced to put the big banner up saying they still exist. They must be missing out on passing trade with all the work blocking them from view.

The Talking Newspaper session this morning was an awful lot of fun. When I first arrived my heart sunk a little bit when I read who my readers were but, for some reason, the annoying one was tempered by the other two and everyone contributed to the general mayhem that is a Gary Edition.

Of particular note was the mellifluously voiced Brian who was an excellent foil. I had him sitting in the Number 1 position so he had to endure my constant barrage of silliness. He was well up to the challenge and, almost, gave as good as he got.

All up, it was a jolly good laugh – we even had the engineer in fits – and we finished nice and early, giving me plenty of time to get home to spruce up the house ready for Mirinda’s return tonight.

It was on the way home that I noticed how much progress had been made at Deer’s Leap. I remember from the extension how quickly walls can go up once the builder starts on the big blocks. Well, Deer’s Leap is no different it seems.

It’s starting to get difficult with the bushes growing but I shall persevere with capturing the progress until my camera is completely blocked.

4 Responses to Laughing on the outside