Last November Mirinda bought me a ticket to see The Importance of Being Earnest the opera. (She also bought herself a ticket) It was tonight. It was absolutely insane and delightfully mad.

It was performed at the Barbican, a venue we haven’t visited for a while. In fact, it’s been so long that I had a lovely reminisce on the number 4 bus. 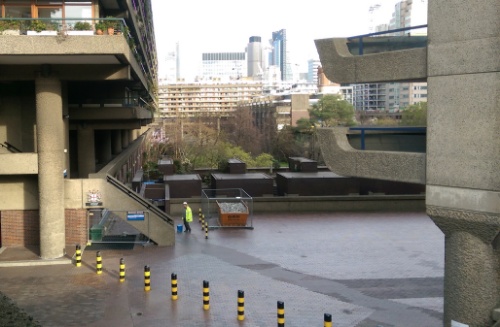 We met at the new Italian restaurant, Osteria and, after a cocktail (which Mirinda claimed made it a Date Night) had a delicious if somewhat misleading meal.

Strangely the soup wasn’t as described on the menu. With both of us feeling a bit poorly, potato and garlic soup seemed just the ticket for entrée. What turned up was kale, pea and chilli.

The Schumanian waitress claimed there was a potato in it but, if so, it had been genetically modified to be something it wasn’t. Like a pea.

However, apart from the unexpected composition of the entrée, dinner was lovely. I also thought the lake view was lovely though Mirinda thought it was all a bit Brutalist.

But enough about food! What about the stake fence?

I managed to complete the first and fiddliest section before I left and will try and complete it over the weekend – weather and health permitting.

But, the biggest delight, by far, of the whole day was the extraordinary, insane Earnest.

The opera was written by Gerald Barry a few years ago. My mum and Mirinda’s dad would definitely not like it but, other than that, the whole audience was in stitches.

It’s hard to explain the madness but suffice it to say that the megaphones, gun shots, plate smashing, muffin throwing and green carnations all combined to make it a very memorable night of theatre.

I guess it helps that we know the play so well but, like all opera, it did have surtitles so anyone unfamiliar with the play could still get the delight of Wilde’s dialogue. The music was a little more discordant than I usually prefer but, somehow it just worked so well.

Everyone was brilliant so it’s difficult to mention any stand-out performances. Given that I never let that sort of thing stop me, I have to mention the incredible Claudia Boyle who played Cecily with an airheadedness bordering on the sublime. A superb singer and very physical actor. I enjoyed her performance massively.

But that’s not to take away from the rest of the cast: Paul Curievici (Jack), Alan Ewing (Lady Bracknell), Stephanie Marshall (Gwendolen), Benedict Nelson (Algy), Hilary Summers (Miss Prism), Kevin West (Chasuble) and Simon Wilding (Lane/Merriman). They were all superb.

But I mustn’t forget the fabulous orchestra. In view and part of the action at all times, they were great. The conductor, too, was right into the madness.

All round, an amazingly funny and entertaining evening.

This entry was posted in Gary's Posts, Theatre Review. Bookmark the permalink.