Time travel is real. I can testify to it. I’m not sure how else to explain it.

We (Nicktor and I) were sitting in the pub, having a pre-match beer and watching a T20 women’s game on the TV when a guy walked by and said he didn’t know why women played sport because they weren’t any good at it.

I was shocked. It’s not like he was very old and stuck in his ways. He looked younger than me. Clearly he’d stepped through a time portal from 1950 when gender roles were more traditionally defined.

Nicktor and I told him he should watch it before forming an opinion but he just shuddered and continued into the loo. And yet we complain about the way other cultures treat women.

Anyway, enough blinkered and pathetic outdated thinking and on to the game of football we’d come to see. 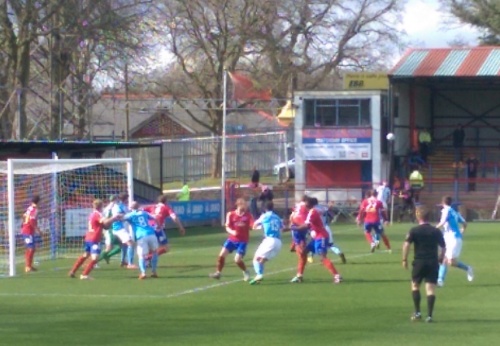 We were playing Braintree, who are well above us in the table and preparing for the playoffs. A win wasn’t likely and we’d be happy with a draw. No one, it seems, told the players that.

Braintree were all over us for the first 20 minutes and managed to slot in an easy goal. Their attack had sliced through us like we’d not been there. It was devastating.

Then, a free kick at the other end saw us get one as well – a glorious goal. So, halftime and it was 1-1.

And did we hang on to the single point by playing a defensive game for the second 45? No way! We came out fighting, determined to take the game to them.

Then we scored a second, extremely well worked goal. The crowd (which is a bit generous because it was more like a group than an actual crowd) went wild (again, this is not entirely accurate but the sentiment was there).

There were a few times in the dying moments of the game that Braintree could have taken control back but it just didn’t happen and we won 2-1. A very satisfying day at the football.

Not that the weather was that kind. At one stage a drenching cloud passed over and…well, drenched us. But, who cares when you win?

During the second half, the weirdly quotable Charlie yelled at an Aldershot player: “Hang around like a fart in a calendar.” Delightfully surreal. We’re still trying to work it out.

This entry was posted in Football games, Gary's Posts. Bookmark the permalink.