Woke up to rain. Not heavy, I admit, but wet all the same. I looked out of my hotel window, made a coffee and just dozed.

I’d slept like a log. This is quite unusual for me as I normally have problems the first night in a new bed. Possibly getting up too early the last two mornings had something to do with it.

Eventually I wandered down for breakfast (ham, cheese and scrambled eggs) then packed and checked out.

I’d planned to ascend the church tower this morning but that plan was thwarted by the opening time being too late. It wouldn’t have been that good in the rain, I’m hoping.

Instead I went for a wander around the town. And it’s a very nice town to wander around in. The people are friendly, it’s almost flat, the traffic is barely there.

Well, except for bicycles. As you’d expect, there’s a lot of bicycles. No wonder the air is sweeter and the people smile more.

The centre of town looks a lot different with all the stalls gone. 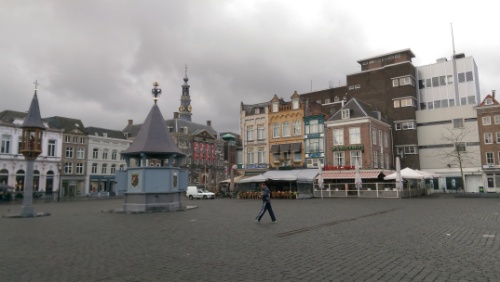 You couldn’t see any of that yesterday. The market is HUGE.

On the way to the station I spotted this old couple on a bridge over a canal and thought mum would appreciate a bit of street art that makes sense. 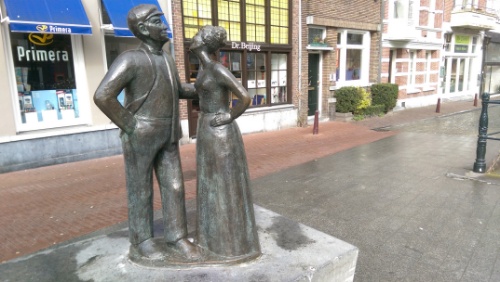 The train to the airport was very full but emptied at Utrecht. I wonder what’s happening there today? Or does everyone in Holland flock to Utrecht on a Sunday? Clearly questions that will never be answered. 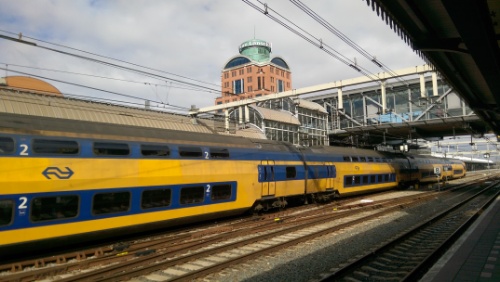 Even full, the train to Schiphol was very comfortable and the trip smooth and simple. This time there were announcements in English which does take a lot of the fun out of guessing.

After working my way through the various levels of inconvenience that is air travel these days (I love the electronic boarding passes which I used for the first time this trip) I bought some champagne flavoured cheese and sat in Starbucks waiting for my flight home.

And, like my flight to The Netherlands, my flight home also took only 45 minutes. Odd because my ticket when I booked it said it would take 1 hour and 10 minutes. Not that I’m complaining! God no. Far from it.

I could complain about the awful trip from Heathrow (bloody terminal 4) to Farnham…but I won’t.

This entry was posted in Den Bosch 2016, Gary's Posts. Bookmark the permalink.