I can only recommend London City Airport. What a brilliant place from which to leave London. Particularly if you’ve stayed overnight in a flat at Canary Wharf. Apart from having to wake up at 4:30am, my entire journey to Amsterdam was painless.

My journey from Schiphol to Den Bosch by train was also very smooth. In all senses of the word.

Having hunted down my hotel and dumped the wheelie bag, I headed into the town centre for some lunch. I stopped by a rather imposing building which had the most delightful clock chimes and parade of people every 15 minutes. It delighted a small child nearby while I had a cheese and pulled pork toastie, rather large salad and beer.

After lunch I explored the market. It is massive and has the most delicious apple turnovers I think I’ve ever had. An unexpected treat.

I rather like Den Bosch. If for nothing else just for the street art. Here’s a fascinating falling down house. I have no idea why so many people gathered to look at it…but they all approved. 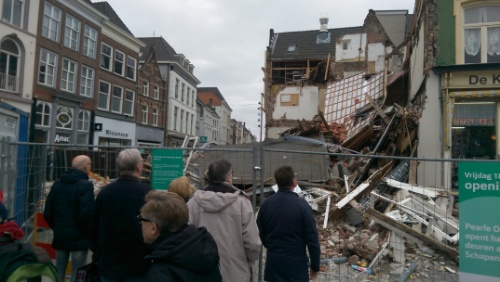 This strange heart shaped thing made up of old bits and pieces, also had a lot of people entranced.

I went to visit the cathedral and there was a bloody funeral on. There was also a very long queue to climb the tower. Had I waited, I’d have missed my slot at the museum.

I did however, have a wander in the cathedral. While the funeral was on, a lot of tourists seemed happy to ignore it and take in the sights. And who was I to buck the trend. Though it did feel a bit weird.

But it was soon time to head to the museum for my timed entry.

And the whole trip was well worth it. The Jheronimus Bosch exhibition Visions of Genius was fantastic. Nearly his entire extant work all in one place. It was also very, very popular.

I was well and truly not alone as I shuffled around the exquisite paintings and sketches. And I have to say that while I am a big fan of the Bosch, I think he was a bit mental. His strange creations of part human, part animal and part furniture are the stuff of nightmares. Delightful as they are.

Two hours later, I found the exit and hobbled away. My knees ached, my head ached, my back wasn’t happy. I needed to sit down. I found a Starbucks and did just that. Actually, there’s only one Starbucks in Den Bosch and it’s at the station. I took the opportunity of checking train times for my return trip tomorrow.

Then, sad, sore, sleepy and sorry for myself, I’m almost ashamed to say, I went back to the room and didn’t stir till the morning.

This entry was posted in Den Bosch 2016, Gary's Posts. Bookmark the permalink.