Our day started late following the excesses of last night. And almost as if feeling the need to herald my entrance to the day with some huge sarcastic roar, the bells of St Ferdinand rang out just as I left the hotel. It was unexpected and unnecessary.

Yesterday, on the door of a shop, we saw a sign saying that dogs, cats and red fish were not allowed inside. Mirinda was certain that poisson rouge was French for goldfish but couldn’t work out why you’d be banned from bringing one into a shop.

I reckoned it was probably, like the durian, a rather foul smelling type of fish available at certain disreputable fish shops but best left outside small, confined places frequented by other people with noses.

On reflection, and following a day off thinking about it, we now think it was a joke. Dogs and cats are clearly banned but they thought they’d soften the blow by adding goldfish.

And while we saw a lot fish at the local market this morning (including the biggest prawn I’ve ever seen) goldfish there were none. 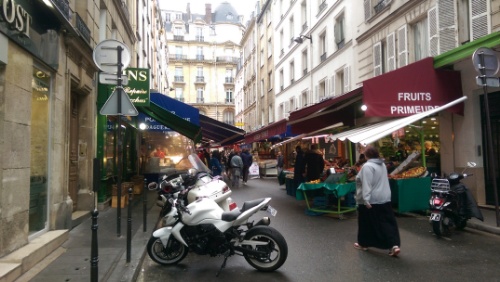 And what a lovely market. If we lived locally this is where i’d do my shopping. Wonderful fresh fish, amazing cheeses, mouth watering pastries, vivid fruit and veg…just prefect. The sort of place that Rachel Koo coos about.

We stopped at a small cafe near the end of the market for a lovely French breakfast before heading off to Parc Monceau…which should be renamed Joggers Paradise.

Seriously, we’ve never seen so many joggers all running at the same time as we did in this park. There’s a path all the way round and they kept up a constant stream as they kept trotting along in their anti-clockwise way. The local bods need to install some traffic lights for the normal people who walk, given the AJD*.

Though the park isn’t just full of joggers. There’s also quite a few statues including a few lifelike ones sitting on benches. I was fooled for a bit trying to chat up this French woman. 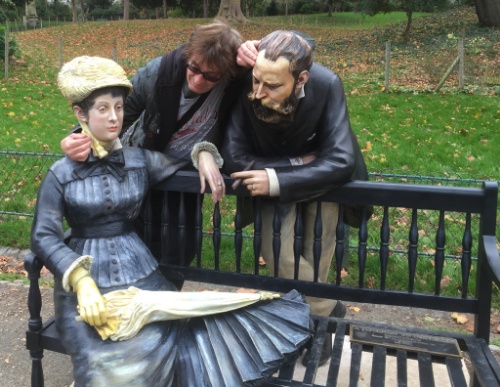 But then onto the highlight of the day, a visit to what is now, for me, the best museum in Paris.

The Jacquemart-Andre Museum was once the home of Edouard Andre and his wife Nelie Jacquemart. They collected art from all over. While they were rather eclectic in their tastes, they did rather fancy the Renaissance.

When Nelie died the whole house and collection was left to the country to be enjoyed by the people as a museum. This happened in 1913 and has been so since.

Gloriously wonderful things, in so many sumptuous rooms, it was a joy to visit.

While there were so many brilliant things, possibly the most wonderful was the Winter Garden and Staircase. An extraordinary confection.

And, of course, I couldn’t go passed the St Sebastiens, of which there were three.

Truly a wonderful museum and one that anyone coming to Paris should try and visit. Forget your Louvres and Rodin and head for Jacquemart-Andre.

The other great thing about it is the cafe. A splendid menu with a lovely house Chablis and rather special list of salads named after various artists.

The food wasn’t bad but it was a bit bland. Nicktor would probably like it. 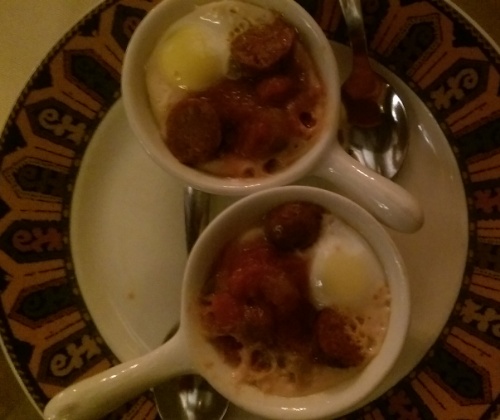 A bit of the entree