In September I popped over to Paris for the day with Karen in order to visit the Fondation Louis Vuitton. Today I returned with Mirinda so she could marvel at the art on show.

Actually she was surprisingly responsive to some of the art (not really the sofa on the freezer or the naked guy on skates) but what she loved the most was, of course, the building. 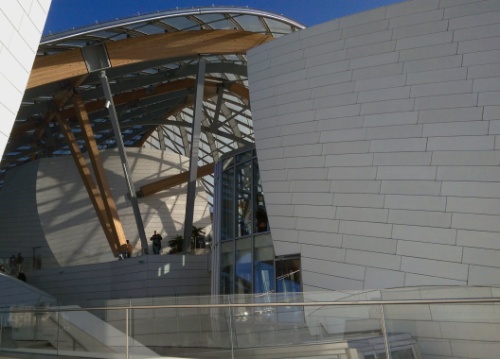 We walked over from our hotel, after a lovely French breakfast at a local cafe. Across a very busy road and under a very smelly subway we emerged on the outskirts of the 900 hectare Bois de Boulogne.

Some of the walking paths through the woods reminded us of home and there were even some dogs but the constant traffic noise quickly brought us down to earth. 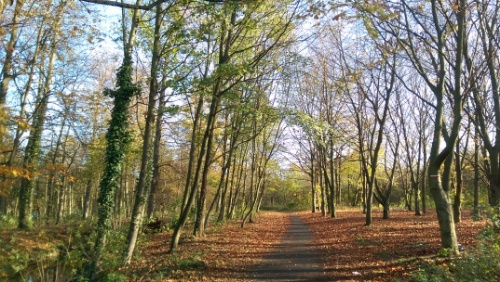 Dodging hordes of joggers, we made our way to the Louis Vuitton under decidedly better skies than I did in September. No sign of umbrellas today, Karen.

As I said, Mirinda loved the building though, like me, she wondered why there was no cafe. When she asked a girl out the front where the closest cafe was she was told that the restaurant in the Fondation would serve us just coffee. Upon entering, however, it wasn’t open. By the time we’d wandered around it was open and packed with a horrendous waiting time.

We decided to visit the very child friendly Jardin d’Acclimatation because we’d heard there was a cafe there. There are a few, actually and I feel sure that there are stress free people somewhere who just love sharing a beverage with screaming, generally badly behaved children…but we’re not them.

We decided to give the kids a miss and headed for a proper adult themed cafe on the Avenue Charles de Gaulle. This was the place that Karen and I were going to eat in except it had stopped serving food. A shame because the food is pretty good.

We decided to have the fish. Mirinda had a slab of tuna and I had the salmon on spinach. Mine was particularly delicious. 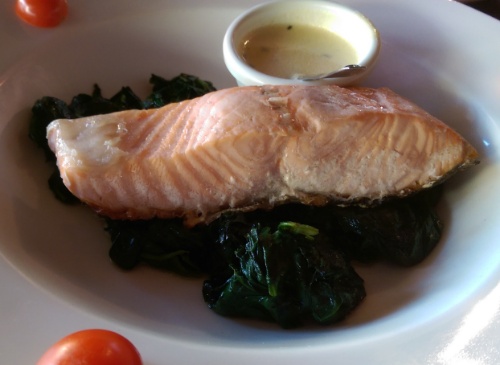 After a lovely long leisurely screaming kid free lunch, we slowly made our way back to the hotel.

On the way back we popped into a horrendously crowded Carrefour supermarket which was having a massive delivery of fruit and veg through the front door. Not that that was the problem.

No, the problem was the masses of people casually wandering the very narrow aisles holding up the people who just wanted to shop and leave.

Then, of course, we had to visit the patisserie across the road from the hotel for essential French pastries.

A little later, we strolled up to a jazz club and, after a meal of the most incredible burgers we’ve ever tasted (and cocktails to match) we sat and got down and funky with the indefatigable Boney Fields and the Bone’s Project.

For years Mirinda had wanted to go to a Parisian jazz club and tonight, finally, her wish came true. And what a very entertaining band of fellows they were. 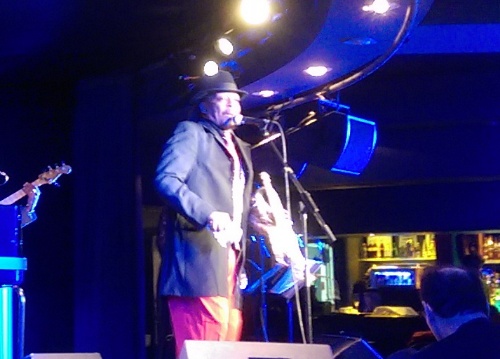 Not that I’d call them strictly a jazz band. More funk and soul with some real R&B thrown in. Think James Brown with added blues and you should get the idea.

Anyway, they were excellent and had most of us up and dancing even though the average age in the room would have been close to 60. We didn’t stay for the third set, though, preferring to leave just before midnight. We left the groupie Jeff and a few other devotees to see the band home.

It was another great day in Paris.

1 Response to It’s a boogie thang