While mum was preparing to come back from Jackie’s, having a day on the laps of the available (and sometimes not available) men of Camberley…

Mum and her new boyfriend, Derek

…I was happily lying on the sofa having taken a first sip of my newly made coffee. It wasn’t raining and the girls were playing with their usual lack of restraint.

Before I could take another sip of my coffee, this peaceful and typical Sunday scene came to an abrupt halt.

Emma started scratching at her muzzle, making unusual wimpering noises at the same time. I watched as she started rubbing her face frantically on the rug. She was clearly distressed about something so I called her over to join me on the sofa.

She sat down on my lap, looking up at me balefully. She then started with the muzzle scratching again. I also noticed that she was moving her top jaw sideways. It was a bit odd.

Suddenly, as if just realising there was something wrong with her playmate, Freya leapt onto the sofa to sit and watch.

Unfortunately Freya’s timing could have been better. She sat down just as Emma stretched out, which knocked Freya off the sofa.

Freya’s positioning could also have been better. She was swept straight onto the small coffee table, sending my all but full mug smashing across the tiles.

I now had the situation where I had Emma in obvious distress on my lap, a puddle of coffee littered with shards of ex-mug to keep the other two clear of and the remains of last night’s sleep to get over. 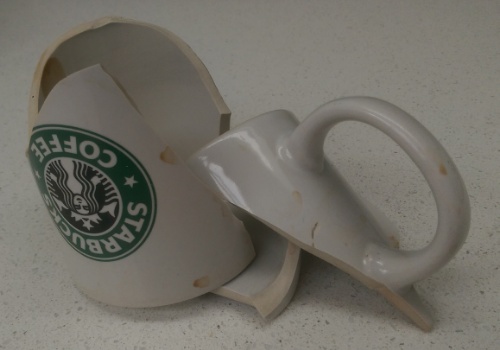 Remains of the mug

(Please note, this is not a favourite mug and we still have plenty in the cupboard.)

Emma was actually lying motionless on a cushion so I cleaned up the mess while holding the sofa back. I should mention that Day-z was completely oblivious to all of this.

Eventually I returned to Emma who had restarted her efforts on her muzzle. I figured I’d check her mouth to make sure something wasn’t lodged between her teeth or around her gums. I couldn’t find anything. I even shoved my fingers down her throat, searching for an obstruction but obstruction there was none.

I then started thinking about the emergency department of the vet. The one where Mirinda took Carmen and I took Day-z. I didn’t fancy it and if Emma could just hang on until 10am, the vet would be open properly. Almost as if understanding the importance of waiting, Emma went to sleep on my lap. About ten minutes later Mirinda woke up.

I took her usual cup of tea up and explained about Emma who wasn’t her usual boisterous self. Mirinda put her n a headlock and opened her jaws and declared she had something wedged in her palette. She couldn’t get hold of it so, with Mirinda holding Emma’s head, I reached in and managed to find the obstruction. With care and deliberation I pushed it backwards and it came free.

It was a stick and it was wedged in tight between her teeth. This is an inept artist’s representation of what it looked like:

The black thing is the stick – it had a knobbly bit in the middle.

Emma was instantly cheerful though somewhat subdued. I showed her the offending object and, not for the first time, cajoled her about trying to eat bits of the garden. Clearly she’d forgotten the stone incident of last year.

Anyway, disaster averted and she was soon looking a bit happier.

The 55th photo of Emma on the blog

Relieved, I went shopping (after a special Sunday breakfast of griddled leeks, eggs and ham) and mum returned from Jackie’s.

After lunch, we decided to take mum to Chawton to show her around Jane’s village. She loved it.