Denise and Tracey visited a castle in the country today. At the end of a successful days touristing, Denise then tried to get herself run down by a cyclist.

Meanwhile we decided that mum needed to walk 250 miles, mostly up hill.

First thing I dragged her into Farnham in the violent wind and rain. She bought a rather attractive rain thing for her head that closely resembled a shower cap. At least it was more effective than trying to maintain a grip on the umbrella.

Second thing we decided she should go and see the (Mary Seaton) Watts’ Cemetery Chapel and Gallery. This entailed some pretty hefty hill striding. Still, the place is so beautiful it was clearly worth it.

Then, as if to mock the laws of gravity, we headed into Guildford to see the Guildford Shakespeare Company’s production of Alice. It was a moveable production with lots of stairs and very steep hills on cobbled stones. 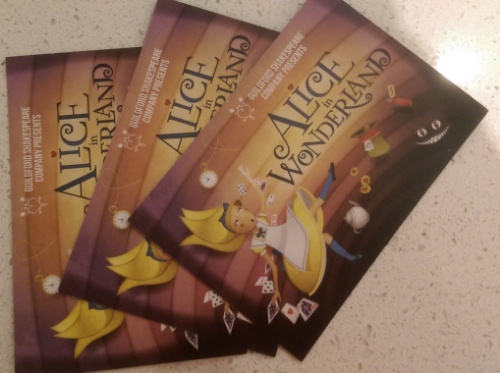 Then we forced mum into the Yo Sushi restaurant in Guildford and made her easy chicken teriyaki with her fingers because she refused to use chop sticks and we were in a hurry.

Actually, it was all a bit much for poor mum so we’re giving her the day off tomorrow.

But back to Alice. It was superb. The cast worked brilliantly together. Alicia Bennett was a delight as Alice and James Camp perfectly harried as the White Rabbit.

It’s difficult picking a favourite but I thought Alex Scott Fairly was delightfully insane and suitably manic. We sat down to tea at his table which was an experience and a half.

Speaking of experiences, mum was mistaken for the Queen of Hearts by the Five of Hearts and almost caused quite a commotion.

All up, a wonderful day though maybe a bit much for mum. Mind you, she did a great job with getting rid of the leaves off the terrace.

That was how I left it and…

…that was how I found it. Amazing woman, my mother. I still have no idea how she managed to get the wheelbarrow up and down the steps.

This entry was posted in Gary's Posts and tagged Alice, Guildford, Seaton, theatre, Watts, Yo Sushi. Bookmark the permalink.