When is a Coble not a Coble? When someone who doesn’t know what they’re doing enters them incorrectly on MIMSY and I wind up spending a few hours sorting it out!

What you may not know is that the Coble, as boat design has been around a very long time. In fact, the word ‘coble’ is Anglo-Saxon for, would you believe it, boat!

These little boats have been floating off the north east coast of England for centuries, catching fish close to the shore and down coastal rivers.

They are specifically designed to allow them to be dragged across the beach by hand, pushed into the surf then rowed out beyond the breakers before the single mast is hoisted and the single lateen sail raised. Apparently they are a pain to sail but relatively easy to get in the water.

They are not life boats…though the wonderful Grace Darling used one during her more heroic antics.

Kristin, who helped with the shipping gallery decant, apparently thought just about any small boat was a life boat. In this case she was wrong.

At lunch time, needing a break from the half term horrors in our museum, I went over to the V&A to see if I could find our shop. It is somewhere in the Tower of Babel but I’ve not found it yet. 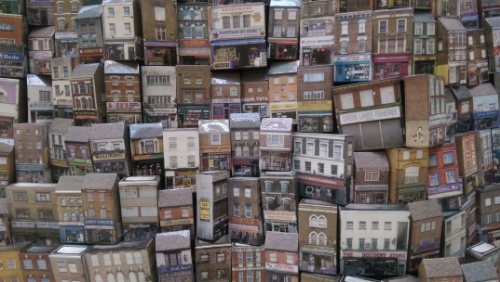 I guess I’ll just have to wait for it to turn up some time in November.

After work we went and saw Nicole Kidman in Photograph 51…but I’ll blog about that tomorrow.

This entry was posted in Biographical sketch, Gary's Posts. Bookmark the permalink.