Back to the future day

This morning we had a delivery. I thought it a bit weird that the delivery driver did not think it odd that I had a small, fluffy cocker poo on my shoulder when I answered the floor and then signed his machine. I guess he must see a lot stranger things on his travels.

For a while now I’ve been contemplating ‘collecting’ images of street furniture and providing them with a history. This isn’t going to be a big thing, just a sort of blog filler when nothing particularly exciting happens.

My first one concerns this inspection cover. 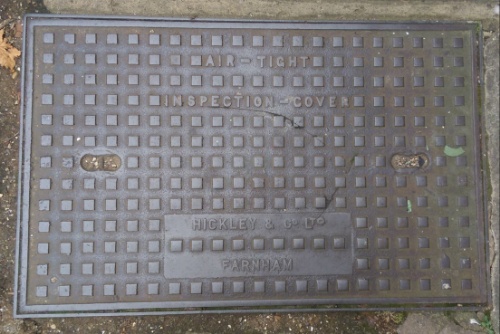 It was made by Hickley & Co Ltd of Farnham. Hickley’s started life (sometime prior to 1895) as a coal merchant, started by Aldershot resident John Hickley.

I haven’t been able to find out when the expansion happened but by 1907 the company was known for coal, builder’s material and ironmongery.

He moved from Aldershot to live at Upton House in Hale which he attempted to electrify, dying before it could be completely installed. Apparently he was a bit of an early adopter when it came to new fangled stuff. (Clearly he would have bought an Apple watch.) He also had an early car.

In 1880, before Hickley moved in, Upton House was up for rent. It was advertised in the Aldershot Military Gazette as having 13 rooms, 2 cellars, a double coach house, 2 small stables, conservatory, lawn and a kitchen garden. A small place, then.

He died in 1898, leaving a widow (Emily) and a flourishing business, the latter in the hands of his brother-in-law Thomas Edward Webb. It is rumoured that John’s nephew, a Mr Andrews, lost all the company money and eventually it went bust.

The company is not just remembered by the manhole covers in the pavement of Farnham roads, however. Where South Street crosses the A31, is Hickley Corner and on this corner is a collection of buildings called Hickley Court. They are so named because it was on the corner that Hickley’s shop stood. It was demolished (along with a load of other buildings) when the bypass was built. 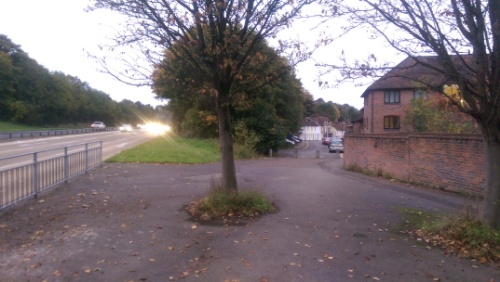 The photo above is taken at Hickley’s Corner…roughly. On the left is the A31 Farnham bypass, to the right is Abbey Road. I am standing on the corner which is now a footpath. The building at the far right is part of Hickley Court.

And speaking of history lessons… I’ve been waiting for Marty all day but he was a no show.

4 Responses to Back to the future day