This morning in Waitrose I noticed that they’ve started selling fireworks already. This is new, in Farnham anyway, because I’ve never seen fireworks for sale in Waitrose before. It’s still a few weeks before Guy Fawkes night.

Tonight, after going outside to the toilet, Day-z came back in shivering. At first I thought it was the cold and the fact that she didn’t want to sleep in the laundry (she never does, really) but I was wrong.

Some dickhead had decided tonight was the night for making loud noises. So lots of dogs have to suffer unnecessarily.

Now, I don’t really blame the dickhead who is obviously anti-social and doesn’t know any better. I blame Waitrose. Surely this is way too early to be selling fireworks and why the hell is the top of the supermarket ladder selling them anyway?

It’s bad enough that they started their Christmas stuff about a month ago but at least that’s just bad taste and not upsetting.

It is the responsibility of the old to moan about the young…even when the old were just as bad when they were the same age.

Still upsetting are the stairs for poor little Freya but she has finally conquered them. She still squeaks and squeals from the top step but eventually she hugs the wall and makes her way down. Now, if she could just manage the toilet training with a little more than guess work, it would be perfect.

At least she handles other dogs perfectly. Today we ran into a woman with a Westie-poo the same age, size and colouring of Freya. They had a great time.

Freya loves paying with Emma but there’s no getting away from the fact that their size difference is significant so meeting Bella, the Westie-poo, was fantastic.

The two little ones ran around and played and tumbled all over the place.

We were then joined by two more cocker poos, one grey, the other black. They were five and three years old respectively. They were a bit above the playing and just stood and watched the playing puppies.

When the owners of these two newcomers appeared I mentioned that we were having an impromptu cocker poo party.

After polite laughter, we all exchanged dog tales (as you do in these situations) before all heading our separate ways.

Sadly I didn’t get a photo of all the dogs (it always seems a bit odd taking photos of other people’s dogs) but I did take this rather strange panorama of the park. 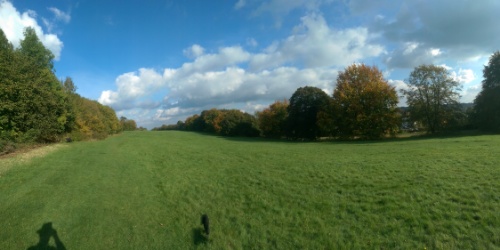