Amanda and Liz were on the Isle of Wight, looking for a friend’s virginity when Liz suddenly turned to Amanda. They’d been discussing their employment situation and how fortunate they’d been, moving up the ladder. Liz gave a satisfied look to her friend and said “I guess you could say we’ve become Captains of Industry.” Amanda nodded sagely.

They were both a bit drunk and it was during a hens night and was quite a few years ago but it’s still brilliantly funny. Mind you, after hearing the story Mirinda said that she must definitely be a Captain of Industry then. I corrected her, saying she was clearly an Admiral. Oh, how we laughed.

It’s hard to believe that it’s been a year since Amanda and Carlos became our first dinner guests in our ‘new’ home. It was so momentous that they became our October calendar photo. Actually, looking back at that Autumn photo and the one below, it must have been a bit warmer last year.

Last year, Liz was supposed to come too but, at the last moment, she did something terrible to her back and had to go into hospital and therapy and…well, she was basically put out of action for quite some time. She made up for it this year though.

Actually, I didn’t think I’d met Liz but I must have met her at Amanda and Carlos’s wedding three years ago so this was probably our second meeting. Mind you, we got on like a house on fire. We figured it was because we both have the same sense of humour as a 14 year old boy which makes us click. Of course, I thought she was marvellous after her verdict on my cooking (Superb! Fantastic! The Best Food I’ve Ever Eaten!) as each course was devoured.

Mind you, there was some slight trepidation when it came to the Ma’amoul. Rather than just make the date filling, I decided to make four different fills then not have any way to work out which was which…a sort of lucky dip situation. Unfortunately, Liz has a bit of an almond allergy and one of the fills was almond. I told her she could just go for pot luck; she did have a one in four chance of getting it right. A sort of Russian Roulette using sweet Middle Eastern pastries. Clearly she avoided the almond fingers.

The almond thing was nothing compared to Amanda’s food fetishes. No beef, pork, lamb, venison, capsicum…there’s quite a few. The only meat she eats is chicken. I’d planned lamb tagine so that was going to be difficult.

As it turned out, I did a Moroccan chicken breast and tomato for Amanda which worked well with the couscous we all had and, as luck would have it, she loves tomatoes.

After lunch (and lots of lovely compliments) we went for the obligatory walk up to the castle before waving them goodbye.

A lovely day with lots of jazz hands. 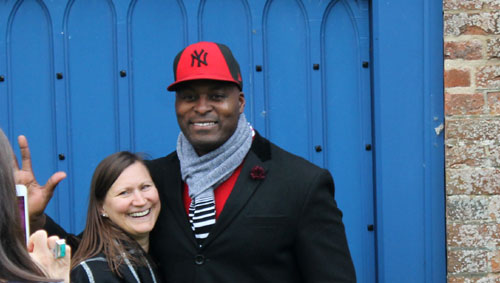 Carlos sneaks in a jazz hand

2 Responses to Captains of industry