International day of the rabbit

Yes indeed. Spare a thought for all the bunnies out there, especially the ones with cats sitting on top of their hutches. Not to mention the Chinese rabbit that lives on the moon.

But rabbit adoration was very low on our list of priorities today. In fact we had a couple of very important guests to feed and entertain.

And the entertainment went as far as an unscheduled walk from the station rather than the customary Max ride. You see, today was the Farnham Food Festival, a yearly festival which sees the closure of Castle Street.

This street closure was joined in jam making with the closure of a number of other important traffic lanes in and around our town. Subsequently, Mirinda was stuck in it for over half an hour. 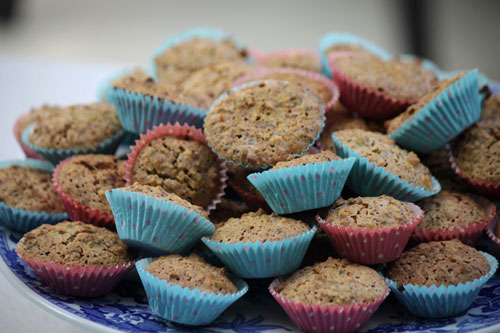 I was hauled away from my kitchen duties and sent off to the station to meet our guests and escort them home. Meanwhile, Mirinda crawled back herself, almost leaving Max in some precarious position on a roundabout and walking.

Having turned everything in the kitchen to stop, I set off, noticing the scores of cars, mostly with single occupants, travelling slower than I was. I walked with a jaunty swagger while they sat, fuming in the traffic snarl of their own making.

I found Sophie and Tom sitting happily on a bench outside the station and we walked back the easiest way. As I explained to them, it wasn’t the shortest or the quickest but the fact that it involved only two turns meant it certainly was the easiest. If remembered, it meant this sort of thing would never happen again. Tom was quite keen for it to never happen again as he felt he’d been walking all day already.

Anyway, we reached home eventually and I made a lovely lunch (egg cocotte, chicken with almond crust and saffron rice for pudding) before we headed up to the park so Tom could see the new adventure playground and throw a ball for Emma to find and bring back.

In fact he thoroughly enjoyed the ball throwing, particularly when it involved using the yellow flicker stick.

One of the things about Emma is her inability to find a ball (or stick) if she doesn’t see it land. Half the time she doesn’t even search. She just stands and looks at you as if you hadn’t thrown it. Generally this means I have to walk over and retrieve it for her. Following close by, Emma always pounces on it just as I bend over to grab it, proving she can find things if she has to. Because of this, I always throw it in the direction of travel. Tom didn’t work that out meaning he managed to walk about twice as far as the rest of us because he was running around after the ball he’d thrown.

A ball that Emma DID see land

Part of the day was devoted to dissuading Sophie from buying a puppy for Tom. We are not convinced the poor thing will have much of a home life. To test this, when Freya quite conveniently did a poo in the Avenue of Trees, I handed him the dog poo bag and told him to start practising picking up. He paled and back away, saying he’d use gloves.

Gloves? Really? Sometimes Tom comes out with the most ridiculous things. I picked it up, adding that it was fortunate she did it near a bin, otherwise I’d make him carry it home.

Back at home, Mirinda and Sophie sat on the terrace with pistachio cakes and tea while Tom and I watched Cloudy With a Chance of Meatballs 2. Tom was amazed I hadn’t seen it. What a funny boy. Does he really think I watch kids movies without him?

PS: No rabbits were hurt in the writing of this post.

This entry was posted in Gary's Posts and tagged dogs, movie, park, rabbits. Bookmark the permalink.

1 Response to International day of the rabbit