Annoyed by the alarm at 7:50am I whacked my phone then clambered out of the bed and made tea and coffee before waking Mirinda. We then packed, searched the hotel room a few hundred times for anything we may have forgotten, before leaving for the hotel reception.

As I waited, two English ladies were checking in having arrived fresh on the morning Brittany Ferry which would become our daytime ride back to Portsmouth. They were all excited about being in St Malo, it appeared for the first time. They were also willing to pay the extra to check-in early rather than wander around until 3pm…like we always do.

During my time with the receptionist a rather rude English grandmother tried to organise her son and four grandchildren into a taxi before my request had been dealt with. The receptionist, fortunately, was cool towards the grandmother while happily tip tapping away at the computer, organising our cab.

We saw the grandmother and her entourage later, at the ferry terminal, rushing to the front of the queue at the check-in desk. I’m not sure why she felt she was more important than anyone else but she clearly was.

We had an unexplained wait on the ferry bus while French people chattered incessantly to each other over walkie talkies. While standing on the bus I overheard an odd conversation between a single woman and a couple about someone having a big round of cheese confiscated. I have no idea if this was today or last year or in 1865. I only heard the bit about the cheese.

The couple were astonished – “We used to drive over to Calais and bring home tons of French cheese in the boot of the car!” Perhaps this explained the hold up; perhaps not.

Eventually we headed for the ferry to be greeted by, possibly, the chief purser and two young chaps. Our wheelie bags were taken from us and hauled up the incredibly steep incline to the ferry. I say our wheelie bags because they ignored the first few passengers and grabbed ours first. I felt like royalty. Or a guest at the Grand Budapest Hotel. (Thank you, Brittany Ferries, this was a very thoughtful touch.)

It was a very nice welcome onto the boat especially given the fact that my leg was killing me because of all the standing I’d been doing. There was standing at the reception desk, standing outside the hotel, standing at the long line for the ferry booking desk.

The booking desk, by the way, has changed the system for checking in. Given we came over in May, this is a recent change. It is, however, a welcome change though it does mean a longer wait at the desk. Previously they would hand out the boarding cards as you headed out to the ferry rather than when you checked in. Now, in a move guaranteed to speed things up and stop the annoyance of travellers, you get your boarding card as soon as you check in.

The funny thing was that the person who handed you the card was the same person who had earlier checked you in. It was a very odd arrangement.

There was also a very long stand on the bus as we waited for it to depart for the ferry.

All of this standing about meant my leg became very stiff and unwieldy. And painful. I sort of staggered up the steep ramp as if I was ascending Everest wearing stiletto heels.

Once on the ferry (after thanking the young chap for pushing our bags all the way up) we found our room and dumped our stuff. 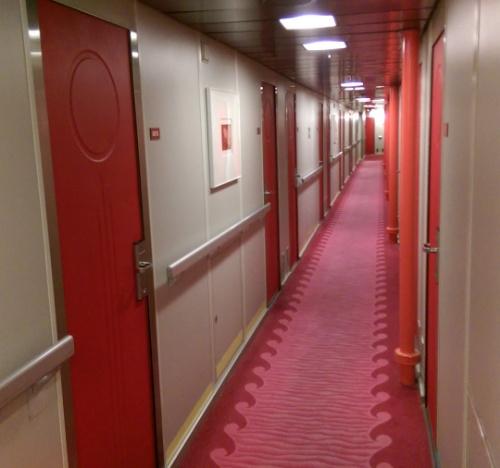 We normally don’t bother with a cabin on the return trip. The reclining chairs are more than comfortable enough and we like to wander around anyway. When I booked, however, they were, more or less, giving cabins away for about £10 more. For unknown reasons I thought this was a good idea.

Fast forward half a year and the good idea bore fruit.

After a bit of a stumble around the ship searching for a glue stick (the finding of which has eluded me the entire trip) and taking some air, we returned to our cabin where Mirinda ordered me to remain, resting my leg. It wasn’t difficult to agree given I’d tripped over my big toe a couple of times and my leg was a bit on the painful side.

Leaving me to doze, read and snooze, Mirinda went for a wander. I have no idea how long she was a away but she returned with a cup of coffee and a ham sandwich which I was very grateful for. She then disappeared again to work on her Purpose Statement for her DBA. Two hours for a sentence. And all thanks to Dr Guy.

After another while she returned and we ventured up to deck 8 to avail ourselves of the wifi connection. I was only allowed out of the cabin if I used my walking stick and the lift. 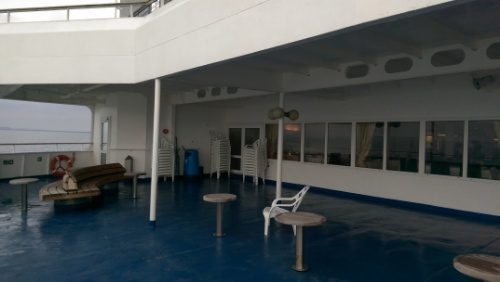 Of course, these things rarely run smooth. Having settled ourselves in the wifi area of deck 8, we discovered that the wifi password wasn’t working. I dragged my leg down to deck 6 to take the matter up with the information girl. I was prepared to be angry but she was sweetness personified and merely gave me an alternative that, while slow, did actually work.

And so, the rest of the voyage was spent typing up this entry and generally being on the Internet. Mirinda spent the time studying.

There were no problems at Portsmouth and we left the boat, strolled through customs and were in the back of Carole’s cab in next to no time.

We were relieved that the house was still there and settled in for the night (the dogs will be home tomorrow).

It was a lovely, restful holiday. Just a shame it had to end.

This entry was posted in Brittany 2016, Gary's Posts. Bookmark the permalink.